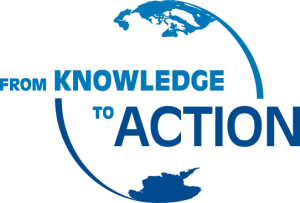 In my last post, I gave you an overview of the International Polar Year Conference that just wrapped up in Montreal. In this post, I thought I’d provide a flavour of the research that was presented at the conference. While I couldn’t attend in person, over the course of the week, I was lucky enough to be able to speak via Skype with two researchers presenting on two very different but equally interesting projects. Both of them have produced short summary videos called FrostBytes, which I’ve included for context.

Keita Suzuki is a researcher at Université Laval. He studies how Arctic food webs are being affected by changes in the environment, and how that will impact key species like Arctic cod. Suzuki presented a poster on this topic Monday evening.

When light returns to the Arctic in spring, it stimulates the growth of phytoplankton. The phytoplankton is then consumed by tiny free-swimming crustaceans called copepods. In his study, Suzuki grouped copepods into two main categories. The first consisted of calanoid species, distinguishable by their prominent antennae and reaching several millimetres in size, large enough to be seen with the naked eye. Species like Calanus hyperboreus are specialized to live in Arctic environments, and are the main food source for fish like Arctic cod. Into the second category went smaller species like Oithona similis and Triconia borealis, usually less than a millimetre. These species are more broadly distributed around the world’s oceans.

By summer, most of the nutrients in the water have been used up by the phytoplankton. At this time, wind becomes very important. As it blows over water near the continental shelf, it sets up currents that bring nutrient-laden water up from the depths. This causes a bloom of plankton, which in turn is good news for copepods. But such wind-driven upwellings can only happen if there is open water. Since climate change is causing larger areas of the Arctic to become ice-free each summer, Suzuki wondered if it would have an effect on copepods.

Over the course of six summers, Suzuki took samples of the water column from the southern Beaufort Sea, using a net with holes 0.2 mm wide. After pouring out the water, he then spent many laborious hours with a microscope, counting and sorting the creatures into their groups. The results? From 2004 to 2007, the total copepod density increased from an average of 60,000 individuals per square metre to over 170,000. This increase corresponded to periods when there was more open water and wind conditions likely to create upwellings.

Is a more productive Arctic ocean good news for fish? Not necessarily. The increase is accounted for mostly by rising numbers of smaller, less specialized copepods; the larger calanoid species did not increase significantly. “Large copepods are specialists,” says Suzuki. “They have strict spawning seasons, usually during a short period in the spring. In late summer, they migrate lower in the water column.” This means they may not be able to take advantage of these summer upwellings, unlike the small copepods that reproduce continuously. Another difference may be due to life span; the small species tend not to live as long as the larger ones, so the impacts on population would be noticed more quickly.

Arctic cod currently specialize in eating calanoids, so the question now is whether they will alter their diet to take account of the changing conditions. If they do, it could mean a bumper crop of fish, and perhaps the beginnings of an Arctic cod fishery. If they don’t, it could mean trouble for cod-dependent species like seals and whales. There is also the possibility that the calanoids will change their breeding patterns to take advantage of the new conditions. No matter what happens, it’s clear that the Arctic is not the same place it once was, and researchers like Suzuki will have lots to investigate in the coming years.

Marie Noel is a researcher at the University of Victoria. She studies how beluga whales are affected by contaminants in the environment, particularly polychlorinated biphenyls (PCBs). She presented her work in a session on Thursday morning.

Liquid PCBs were once used to insulate the various components of electrical insulators from each other. Unfortunately, they meet all the conditions of the chemical contaminant trifecta: they are toxic, bioaccumulative, and persistent in the environment. Most countries banned PCBs decades ago, but measurable amounts of evaporated PCBs are still being transported all around the world through air currents. Once they arrive in the Arctic, the cold temperatures cause them to condense. They enter the food chain in algae, and become more concentrated with each link, finally accumulating in the fatty tissues of top predators like belugas.

PCBs are endocrine disruptors, interfering with the chemical signals that regulate growth, reproduction, and even the immune system. But these changes are hard to measure in belugas, so Noel has taken a biochemistry approach. She studies a protein found in most animals called the aryl hydrocarbon receptor (AHR), which is activated by PCB-like chemicals. Activating this receptor stimulates the production of enzymes that break down the foreign chemicals. Animals exposed to a lot of PCBs would be expected to produce more of this protein. “You can see changes at the molecular level long before you’d see anything individual or population level,” says Noel. “So proteins like this act as an early warning system.”

Noel relies heavily on Inuvialuit knowledge to get the beluga tissue samples she needs for her studies. Local hunters helped her set up camp on an uninhabited island off the coast of Tuktoyaktuk that is commonly used to butcher beluga whale carcases. Over the course of three summers, she collected RNA samples from the liver, muscle, and muktuk of 54 whales. “This project would not have been possible if we didn’t have the participation of the community,” she says.

Back in the lab, Noel’s analysis showed that although belugas tissues contain only moderate concentrations of PCBs (about a tenth of that found in belugas from the St. Lawrence river) there are still noticeable changes in the expression of AHR. “We do see that belugas are responding to PCBs, but what it means in terms of the consequences for the whole population is hard to say at this point,” she says. Noel’s study constitutes a baseline measurement against with further changes in beluga physiology can be compared. This underlines the importance of continued research. “Beluga is really important source of country food. More knowledge will help protect those populations, and provide sustainable hunting for these communities,” she says.

This site uses Akismet to reduce spam. Learn how your comment data is processed.